The Religious Left is Small But Loud

The recent publication of the editorial to remove Trump from office by Christianity Today retiring editor Mark Galli spurred the discussion yet again of the rise of the religious left. Of course, Christianity Today is no left-leaning mag and the call for Trump’s removal stemmed from conservative values, not liberal ones. Just about any time that a left-sounding, religious voice is heard, you will read religion writers forecasting the rise of a movement to counter the religious right. Writers at religioninpublic.blog are on record questioning those predictions, as have others. More religiosity is just not predictive of liberalism – period. But that doesn’t mean that there aren’t religious liberals out there and we set out to document them and the volume of their voice.

It’s easy to find activists, organizations, and vocal clergy to represent the religious left, but what we really need are estimates of population proportions. We have ample survey data for this task in the Cooperative Congressional Election Study series from 2006-2018, all of which have enormous samples (~50-65k) and most of which have appropriate questions.

Let’s get right to it. The religious left is the most active group in American politics. The figure below shows the average number of political activities (campaigning, putting up signs and stickers, protesting, donating to a party or candidate, contacting public officials, and attending local meetings) in 2018 separated by church attendance and ideology. In each ideological category, more church involvement boosts political activity, reflecting long established findings in the literature (paper pdf). And very liberal citizens are quite a bit more active than any other ideological group (by at least .5 activities). The average score of those who identify as very liberal who attend weekly is close to 2 activities, which is a common definition of a political activist used by political scientists.

Is this pattern simply a function of 2018 politics, when there was much more to protest and get angry about on the left than the right? This is the essential dynamic driving midterm elections where the incumbent president’s party tends to lose seats (and Trump was no exception of course). The figure below gives us a view back to 2010 using the CCES series. There are only 4 political activities to make this index, which explains why the figures are a bit lower. The pattern is remarkable – political activism has been declining across the board through his period, but less so among liberals. In fact, Trump’s election appears to have kept the activism of the religious left afloat. So, no, the high activism of the religious left (and liberals in general) is not limited to 2018, but Trump’s election does appear to have enlarged the gap. 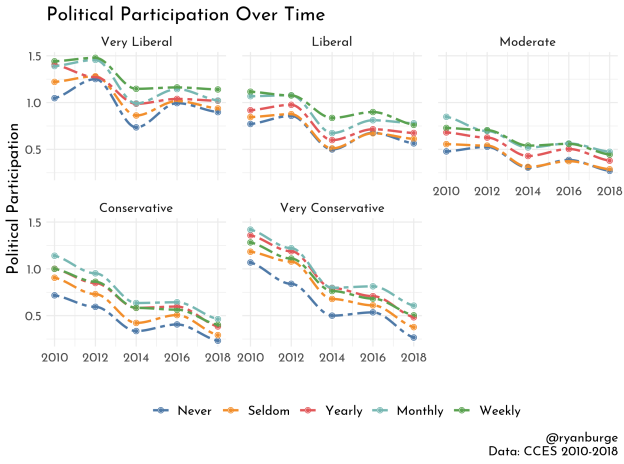 While it appears that the religious left is loud, how big is it? There are not many who attend weekly or more often and identify as very liberal. In 2018, they were just 1.3%. Let’s expand out the definition a bit (liberal + very liberal, along with those who attend several times a month or more often) and track it over time from 2006-18. Their numbers have been declining since the start of the series from a high of 7.6% to a low in 2014 of just under 5%. However, it’s clear that their numbers have rebounded somewhat in the Trump era, popping back up to 6% by 2018. I think “resurgence” is too strong a term, but it is clear that something happened to stem the losses and it’s hard to imagine that it wasn’t related to Trump. The pattern looks about the same for just the weekly or more frequent attenders who ID as very liberal except that their numbers dropped earlier (in 2010) and their 2018 number is actually a bit higher than it was in 2006.

The religious left is religiously diverse, but has a high concentration of Christians of course. The largest grouping (in 2018) is made up of Catholics, followed by mainline, evangelical, and black Protestants. This might surprise some people, but there are nones on this list. Yes, that means that 7.1% of those who attend weekly or more often and ID as very liberal otherwise call themselves some form of none: nothing in particular, atheist, or agnostic.

It’s also not surprising that the religious left is the most racially diverse category. As the figure below shows, weekly+ attending, liberal and very liberal identifiers are only 59 percent white, which is considerably lower than the national population of adults (75% of this sample, unweighted). Note that religion makes liberals diverse. The least religious liberals are far more white than the most religious. Of course, this generates some problems for the more liberal political party (Democrats) as Paul has noted before. Conservatives are not divided in this way and surely have an easier time mobilizing followers than liberals.

So, yes. The religious left does exist and it is growing. However, it still makes up a very small part of the American population. It’s fair to say that just one in twenty Americans could be classified as highly religiously involved and politically liberal – our definition of religious left. But, their voices are louder than their numbers as a function of how active they are in politics. In a future post, we’ll assess the issue agendas of the religious left, anticipating that it is highly fragmented given the religious and racial diversity within the group.

Paul A. Djupe, Denison University, is an affiliated scholar with PRRI, the series editor of Religious Engagement in Democratic Politics (Temple), and co-creator of religioninpublic.blog (posts). Further information about his work can be found at his website and on Twitter.