The Religious Composition of the Iowa Electorate

The first formal contest of the 2020 nomination process kicks off Monday as citizens across the rolling hills of corn in Iowa meet in precinct caucuses to select delegates. Obviously it is a distinctive state, with little resemblance to the nation, but few talk about the religious distributions of “Iowegians”. Iowa has little racial diversity – it’s 93% white compared to 75% nationally, but what about the religion of its residents? We thought we would cover this ground to round out the picture of the state that Illinoisans have long joked doesn’t actually exist.

The figure below shows that, in some ways, Iowa looks like the nation. It has the same proportion of religious nones and the same proportion of evangelicals (all races). However, Iowa has double the percent of mainline Protestants and far less religious diversity, thinking about all the other, smaller groups represented in the United States. There are outposts of diversity, however, such as Maharishi Vedic City in southeast Iowa where Marianne Williamson, according to one take, “is already president,” and the mennonite communities, not to mention the nearly 500% growth in the Hispanic presence in the state over the last 30 years (Hispanics are 6% of the population in 2017). 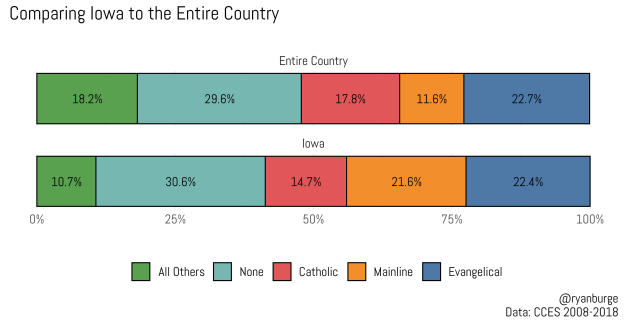 Even if Iowa is distinctive, it is changing just like the rest of the country. The most nation-consistent change is in the growth of the nones, which has increased by about 50% (22% -> 31%) in the last decade. That explosive growth appears to come at the expense of religious others, Catholics, and mainline Protestants. In contrast to national trends showing contraction, evangelicals have essentially not changed through this period (2008-2018). 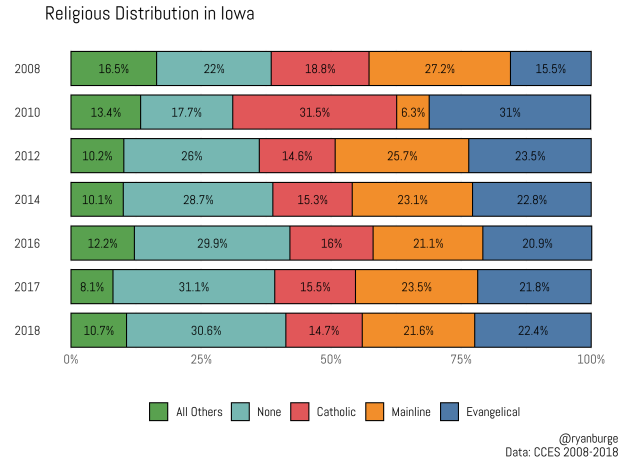 These changes have partisan consequences that also mirror national trends. Democrats have more than double the percentage of nones as the Republican Party, while Democrats have half the evangelicals as Republicans do. Democrats nationally are diversely religious and that is true here too. But it’s still important to point out that both Democrats and Republicans are, on average, religious citizens. 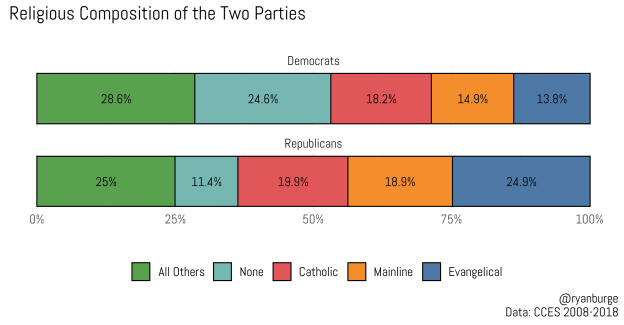 The religious composition of the parties differs in 2018, but how has this been changing across the last decade? Are the parties polarizing on religion in Iowa? It doesn’t look like it. The figure below shows Republican identification for each religious tradition from 2008-2018. White evangelicals have been creeping slowly less Republican across this decade, with a bump up in 2016, followed by a bit of decline. That stands in contrast to the nation, where white evangelicals have been getting more Republican across this time. Since this just includes whites, we cannot chalk up this movement to growing numbers of Latino evangelicals. Other groups have bobbled around (most likely due to small sample sizes), but on the whole haven’t changed much in the last decade. 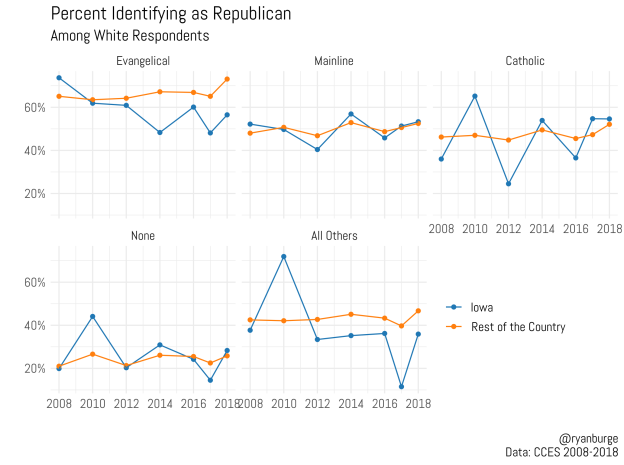 If evangelicals are becoming less Republican, does that mean that their issue positions are distinctive? Mostly not. They look about the same as their national counterparts. They want to withdraw from all sorts of international cooperation, repeal the ACA, reduce taxes on the rich, and move the US embassy in Israel to Jerusalem. The few notable gaps with national evangelicals are on guns, corporate tax rates, and abortion – Iowan evangelicals are more conservative than others. 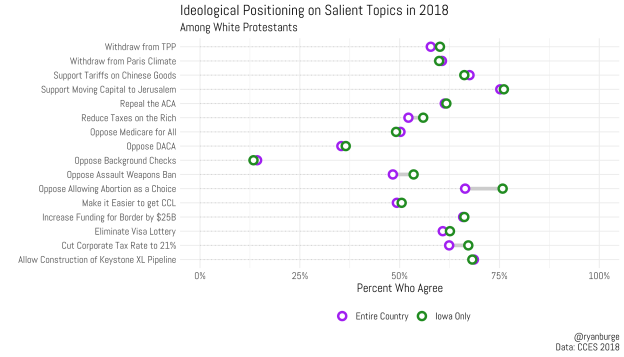 White Catholics also look like their national coreligionists, though there are gaps. They also look particularly Catholic. That is, the hierarchy opposes abortion, but supports more compassionate immigration policy. Iowan Catholics are quite pro-life (more so than national Catholics), relatively few also oppose DACA, and less than half oppose expanding Medicare. That strikes us as a “seamless garment” view that is consistently pro-life. That said, they also support building Trump’s border wall and want to eliminate the Visa lottery. Again, Iowa’s Catholics don’t look much different from the rest of the nation’s white Catholics, though obviously not all Catholics are white. 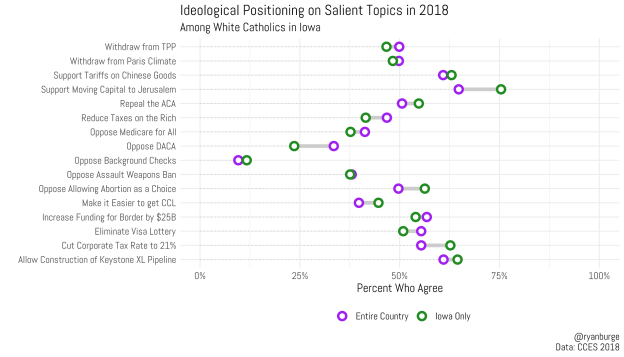 What about their view of Trump? How does Iowa’s religious community approve of Trump’s job as president? The figure below shows that the relationship between worship attendance and Trump approval looks the same in this small, vastly white state as it does nationally. The more attendance within each religious group, the higher the approval of Trump. And the average approval in each group is about the same as well: 65 vs 63 (Iowa vs national) for evangelicals, 44 vs 46 for mainline Protestants, 49 vs 46 for Catholics, and 30 vs 24 for the nones. 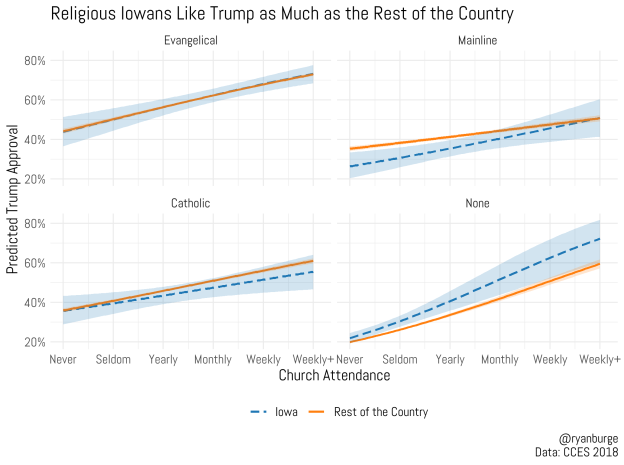 The fact of Iowa’s religiosity, consistency in evangelical presence, and employ of caucuses has advantaged candidates with religious connections. For instance, in 1988 Rev. Pat Robertson harnessed networks of Pentecostals across the state to turn out and deliver unto him a strong and surprising second place showing, ahead of George H.W. Bush. In this contest, of course, there is no real contest among Republicans, but there is among Democrats with considerable churn in the polls over the last few months. Given the bias of many religious citizens against socialism, we suspect that the growth of the nones in the state gives Bernie an edge on the Democratic side. However, it’s possible that some conservative Catholics and evangelicals will come off the sidelines to caucus for the Democrats. If they do, that may give an edge to more moderate Democrats (specifically Joe Biden and Mayor Pete).

Paul A. Djupe, Denison University, is an affiliated scholar with PRRI, the series editor of Religious Engagement in Democratic Politics (Temple), and co-creator of religioninpublic.blog (posts). Further information about his work can be found at his website and on Twitter.